Big Data is Saving the Biodiversity of Tropical Rainforests 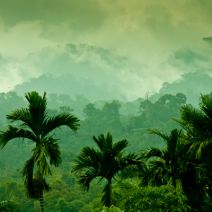 When you think about Big Data, thoughts typically turn to how businesses use the technology to collect and analyze massive amounts of information for the purpose of making sweet profit. Although, there's much more to Big Data than making money; scientists are using the technology to help save the rainforest.

We shouldn't have to convince you of the importance of the rainforest. It's estimated that rainforests are responsible for producing 40 percent of the Earth's oxygen. Therefore, anything that's done to help preserve the rainforests is helping to preserve all life on the planet. This is why groups like Conservation International (CI) exist.

CI is on a mission to preserve the natural biodiversity of the rainforest. Such a mammoth task can only be accomplished if the scientists of CI first understand the environment of which they have pledged themselves to protect. This requires collecting and processing a vast amount of information directly from the rainforest itself, which is where Big Data comes in.

Making the job of CI difficult is the sheer vastness of the rainforest. In fact, the Amazon rainforest alone covers 2,123,562 square miles. How can a small team of scientists possibly monitor such a large area? Their approach is to turn the ecosystem of the rainforest into an IT system, consisting of more than 1,000 cameras designed to monitor and record information, like activity from animals and even poachers, as well as the effects of climate change and land usage.

According to Sandy Adnelman, chief scientist at CI, this process can be likened to a check up for the planet. For example, when you get a physical from your doctor, they check your body's most crucial parts and systems. In the same way, scientists like Adnelman are strategically monitoring the most important parts of the rainforest.

To give you an idea of just how helpful Big Data technology is for these scientists, it's important to remember that the previous way of collecting footage was done manually. CIO explains:

Because the camera traps are located in some of the more remote locations on earth, there's no infrastructure. Teams have to manually collect the data from the traps and upload it, at which point CI scientists run a series of scripts and models to identify the various species appearing in the images. They then blend that data with climate measurements (precipitation, temperature, humidity, solar radiation, etc.), data on trees (growth, survival, deforestation, etc.) and land use data from public sources to create a model of the health of the animal populations at the sites and how they are changing over time.

The previous process was a huge undertaking that took up vast amounts of the scientists' time. For these Planeteers, this was a point of frustration because, when it comes to saving the rainforest, time is of the essence. Thanks to Big Data analytics, scientists can now process and analyze the collected rainforest data up to nine times faster than the previous method. Additionally, the results are far more accurate. This allows scientist to make better use of their time and monitor more foliage.

In the same way that Big Data helps improve operations for these scientists, it can improve the workflow of your business. If you've got a process that involves collecting and crunching large amounts of information, and it's eating away at your budget and resources, then check with NDYNAMICS for a Big Data solution that will make operations easier. In the same way, if you feel like your business would benefit from knowing more information about your target market, we can find a Big Data solution for this too.

Tweet
Tags:
Big Data Analyitcs Environment
The Internet of Things is the Next Big Thing, Are ...
Tip of the Week: Use This Security Checklist to Pr...

Monday, 15 August 2022 Technology Support is Crucial when IT is Everywhere
Friday, 12 August 2022 Make the IoT Work for Your Business
Wednesday, 10 August 2022 We Think You Should Know What Social Engineering Is
Monday, 08 August 2022 How You Can Help Keep Your Employees Healthy in the Workplace?
Friday, 05 August 2022 Don’t Let Your Guard Down While You Travel